There are few people communicating in this forum

Thank you very much for writing this forum post. When I started reading this forum, mainly you and Jörg (@jri ) were active. Since I have been writing posts as well, I’d say more people are active now. And I prefer quality over quantity.

Regarding your first question, I noticed that I personally don’t feel it is very relevant to me at the moment whether DMX is widely used or not. First of all it is important to me that I have found the best tool for my daily work that I know of in the field of knowledge management: DMX.

I am not in the position to compare DMX with TheBrain. But I would rather see it as an advantage on the side of DMX not to be directly comparable with other software. I see the situation-centered UI paradigm as a unique selling point of DMX. In this respect DMX is incomparable.

Regarding your second question, due to the outstanding software architecture, I don’t see any limitations regarding the application, but I think DMX scales well from personal, small projects up to big commercial applications on corporate and global level.

Regarding your third question, I have not yet had any problems with too large topicmaps. On the contrary, I find the deliberate limitation to the situation-centered UI to be an advantage. In my topicmaps I only see what is important in the current situation. I don’t need to visualize the entire topic memory to be able to work with it.

I’m not sure if I understand you correctly, but I have the impression that you expect an automatic layout of extensive topimaps. In contrast to that, I think it’s an advantage that there is no such automatic layout, but that I take care of the arrangement of the topics myself, so that I can find my way around the topic maps the next day, because they still look exactly as I left them, without the interference of any confusing automatism. I’m the one, who maintains that stable state.

I don’t see the problem with the ever-lengthening row (chain) of topics, because I arrange the topics myself and don’t work with the automatically generated chain.

Regarding your fourth question: the distance between two topics is changeable. I don’t have to live with the “very far away from another topic” situation, which you desribed, but can place the topics so that I can just connect them.

Regarding your fifth question, I don’t find it a flaw that you can’t upload attachments, but I do know that customers often feel the need to implement such requirements. I find it a strength of DMX trying to get away from file-based approaches. This does not mean that at the end of the day, you should not be able to produce documents from DMX. But I do not see any advantage in connecting unstructured containers (attachments) with each other.

I hope you find my post somehow useful and continue our conversation here in the forum. Thank you very much for your time and effort to improve the DMX experience.

Thank you very much for your important questions and comments. In addition to @RalfBarkow I want to add a few more points to the discussion:

I hope this is of any help!

Thank you for your patience and detailed answers. I have a further understanding of DMX’s design ideas and use methods，especially the method of decomposing a large topic map into several small ones, which gives me a good working idea.

For DMX there is no marketing effort so far. I guess that’s why it is an under-the-radar project at the moment. Marketing effort will possibly increase as soon as DMX 5.0 final is released. (See “Roadmap” below.)

There was a time when e.g. TheBrain was an under-the-radar project as well. At that time it was useful and usable already.

DMX can be utilized in every field: personal, workgroups, small/medium/large enterprises/organizations.

We have various customers who use DM4/DMX for several years in production.

DMX is ready for production since Beta-4. Since that version we provide data guarantee, that is user data is guaranteed to be transferred to later DMX releases automatically.

DMX follows another UI paradigm, thus in DMX things are designed different and work different than e.g. TheBrain. I’ve written about that in thread “I have some Suggestions”.

One essential feature of DMX is the separation of database content (= “knowledge base”) and topicmaps.

A topicmap displays a portion of the knowledge base. Namely that portion that is relevant to the user in a particular work situation. What is relevant/visualized is decided by the user. The machine can’t know.

Topicmaps are highly dynamic. Things no longer relevant are hidden by the user. So a topicmap will not grow monotonously. Hidden things still exist in the database. 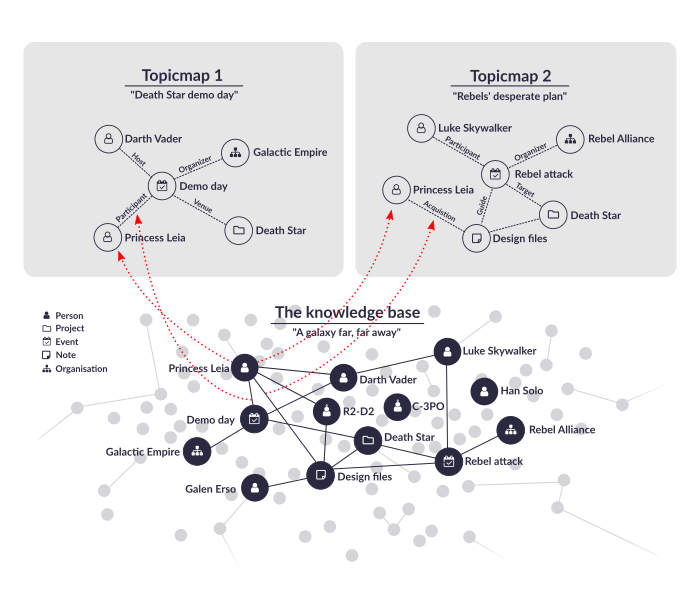 Think of a topicmap not as book content, but as a particular situation in the process of researching and writing a book.

Assume you’re in the process of writing a book. This will include researching other books. Lets say you have 1000 books on your shelf. On your desk you’ll have only 3 or 10 or 20, not the entire 1000. What books are on your desk will vary over time. You will take new ones out of the shelf, and will put back others. You will never have the entire 1000 on your desk. Think of a topicmap not as a book, but as your desk.

In DMX you have several workspaces. Think of workspaces as separate rooms for e.g. different (book) projects. Each workspace contains several desks (= topicmaps), each one for working e.g. on a particular section/topic of your book. As DMX is a digital medium the same (source) book can be located on several desks at the same time! And you can go to another desk instantly. And you’ll find that desk in the condition it was in when you left. Furthermore you can create new desks instantly (e.g. when another one got too cluttered). These are the features why we regard DMX the superior work environment for knowledge workers.

The database can contain many millions of topics and associations. This is not a problem.

A topicmap can contain several hundreds or even thousand topics. Rendering performance is increased by a factor of 10 since Beta-4 release.

DM4 allows the user to represent files as topics. File topics can be associated with any other topic. Several users can work with a shared file repository. Files can be uploaded and downloaded. Some file types are rendered directly in the DM4 Webclient’s detail panel, e.g. PDF.

DM5 (= “DMX”) does not have these features yet, and they will not be realized in the final DMX 5.0 version. But they will be realized later on. At the moment there is no planning for that.

Thank you for your detailed answer. Although I have read the user manual before, I may not really understand the advantages of DMX software architecture. After your introduction, I have broken down a large topic map into several small ones according to your method these days. This method is really good and solves my problems. I will keep an eye on the development of DMX and introduce it to people around me.
Thank you again for your answers!